The sisal plant is a member of the plant family of “agavaceae” which is indigenous to the arid zones of North and Central America. The plant is characterised by its leaves which grow to a length of over one metre and yield a long, creamy-white and very strong fibre. Able to sustain quite extended periods of drought, sisal is a hardy plant that can prosper in areas of limited rainfall.

Introduced to East Africa in the late nineteenth century, the species “agave sisalana” formed the original basis for commercial production of sisal. This species is still grown in some parts but, the REA Vipingo estates almost entirely use a hybrid species that gives greater fibre yields over the life cycle which, typically, covers a period of about 10 years.

Sisal plants can be grown from seeds but the identical replication of planting material requires vegetative propagation. This occurs in two forms, suckers and bulbils, the latter being REA Vipingo’s preferred method of nursery establishment. After twelve to eighteen months in nursery conditions, young plants are planted out in the field, usually at a density of approximately 3000 plants per hectare. A first “cut” or harvest is taken 24 to 36 months after field planting and harvesting then continues every six to nine months thereafter throughout the plants’ remaining life. This is terminated by the plants’ single flowering which sees the emergence, from the centre or “bole” of each plant, of a stalk, known as a “pole’. Poles grow to a height of about six metres and, just before attaining their full height, put out branches which carry flowers and then produce bulbils, after which the poling plants die.

Harvesting is carried out by hand. All lower leaves, standing at an angle of more than 45 degrees to the vertical, are cut away from the bole of the plant with a sharp flexible knife. After harvesting, the leaves are transported to a central factory and decorticated to extract the cortex of ribbon fibres that run along the length of the leaves. Extracted fibres are extensively washed during decortication, sun dried, brushed to separate and align the individual strands of fibre, graded and packed into bales.

The REA Vipingo group pays considerable attention to the decortication, brushing and grading processes and, as a result, produces some of the best quality fibre available on the market. 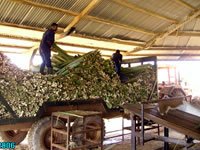 Delivery of cut leaves to the extraction plant for processing 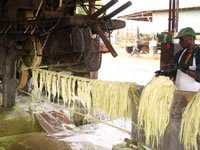 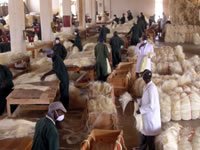 The REA Vipingo group pays considerable attention to the decortication, brushing and grading processes and, as a result, produces some of the best quality fibre available on the market.